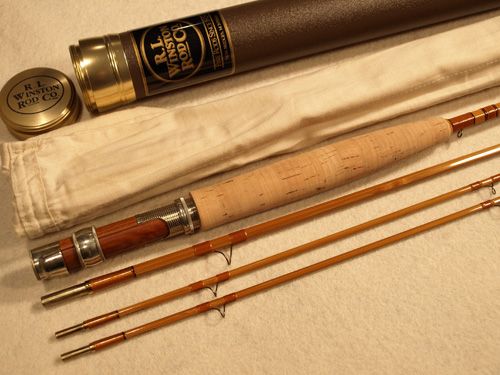 There are few smells in this world that can tell such a story as the aroma that is consumed when opening the tube of a bamboo rod. With every flirtatious breath of varnish and cane, images too elusive for mere words or photos dance through twitching nostrils and settle softly in the mind. It’s a perfume that instantly conjures simultaneous images of classic trout water, sparsely hackled dry flies, fedoras, pipe smoke, fine Kentucky bourbon, and perfect memories of past fishing trips that are not entirely my own. Somehow, there is a connection to fish, streams, mountains, and fishermen who met long before me. Each time the final rotation is made around those metal threads and the cap is removed, it’s as if the Genie has been released from the bottle, and the very spirit of fly fishing has been summoned.

I’m hardly a purist but I do take pride in the fact that my first trout came on a dry fly with a cane rod. This did not happen by design, however, and was certainly not the result of any quest for nostalgic perfection or anti-technology-damn-your-plastic-rod doctrine. It was my granddad’s rod, a worthless old Montague production rod from the 1930’s that’s sentimental value is now priceless, but back then, its only value was that it was better than the rod I had.

The rod it replaced, my first rod, was a K-Mart special that came neatly packaged with a reel, a spool of backing, and a 7-weight, level fly line. A burgundy blank finished out with a black plastic reel seat, black foam handle, and gold tipped, black wraps on the guides; it measured 8-feet in length, probably 3-pounds in weight, and had the casting action of a stiff garden hose.

Somehow, its companion reel was even less impressive. While better suited in capacity for a 4 or 5-weight line, it tightly enveloped the packaged 7-weight line and about 10 yards of 20-pound backing. And as advertised on the package, the reel did have an “adjustable” drag. If you flipped the switch on the back of the reel up, it clicked and provided minimal resistance when pulling out line. If you flipped the switch down, the reel silently exclaimed, “Oh shit!” and the spool rotated at 8700 rpm’s with the slightest tug of line. The result, of course, was a rat’s nest of fly line inside the reel with little knotted loops of plastic peeking out of each port in the spool.

At the time, I wasn’t aware of the physical differences, much less the cultural differences of bamboo and graphite, so neither played a role in my decision to “upgrade” that first rod. The fishermen in my family, including my granddad, were almost exclusively bait and spin guys, so in addition to having no real instruction as a budding fly fisherman, I had no preconceived moral perceptions regarding the material used to construct my rod. Instead, I somehow had it stuck in my head that a rod with a cork handle was better than one with a foam handle, making my granddad’s old Montague the obvious choice over the K-Mart rod.

In no way was I a bamboo fundamentalist and truth be known, I went to bed nearly every night staring at the Orvis catalog and dreaming of a brand new, shiny graphite fly rod. I was a helpless lump of clay in the hands of the fly fishing marketing machine, and I wouldn’t rest until I could secure the funds for the genuine graphite Orvis Superfine fly rod of my dreams.

With an arsenal now obscenely exceeding 25 rods, a time when I hoped, dreamed, scrimped, and saved for one – just one – nice graphite rod seems like a lifetime ago. Even longer go, when I was a kid, it was shoes. If I could just get my feet in a new pair of those Zips, my speed and vertical leap would undoubtedly increase to unprecedented levels. And with an Orvis 7’ 9” 5-weight Far and Fine rod, all of my casting woes would immediately disappear and I would instantly begin catching all of the fish that had been eluding me.

To my disappointment, when I eventually got that rod, my casting and fish catching prowess remained pretty much the same. However, even as a novice, the new, high-end graphite rod’s superiority to my previous rods was undeniable. It was lighter, crisper, and more responsive. It was modern, and cool, and just plain sexy! And it would start a trend lasting more than a decade of graphite addiction. Every year something a little lighter, a little faster, and a little sexier would hit the market and I would be first in line to own one.

Bamboo rod purists would likely equate this to selling my soul to the devil. Aside from the moral and ethical legitimacy of strike indicators, there is rarely a fly fishing topic that incites more passionate debates than trying to determine the superior material for fly rods: good old-fashioned split cane versus the new space-age graphite materials. The proponents on either side possess unshakeable convictions and will argue with a ferocity not seen at even the most heated of presidential debates.

And much like presidential candidates might debate the advantages of change versus experience, the pro graphite contingent will argue that their candidate is stronger and lighter and far more capable of zinging much longer lengths of line in the air, while the bamboo party will claim that graphite has no life – no soul – and has no real connection to the line or fish. They see graphite rods as lifeless, plastic sticks designed for heavingrather than castinga fly line. They think people who fish with graphite rods are communists.

I eventually broke the addiction and my preferences even started to change when I finally had the opportunity to fish with a goodcane rod. My experience had only been with the cheaper production rods of the 30’s and it turns out that there were not only much better quality rods being made back then, but the cane rods being made today are nothing short of fantastic! Passing judgment on all bamboo rods based on my granddad’s Montague was the equivalent of judging all graphite rods by my first K-Mart special. But I still can’t passionately take a stand on one material being superior to another.

I’m not sure if there is a right answer. A big part of it probably has a lot to do with where you fish. For instance, suggesting that a cane rod is the better choice for tarpon fishing in the Florida Keys is a pretty tough sell. If we’re being honest, the real determining factor is more likely personal style. As a teen, I went to school with kids that jumped on every trend from leg warmers to parachute pants. Other kids went the preppy route, while others went with the thrashed denim, rocker look. All of these options served the primary purpose of clothing the kid, but as an individual style allowed the kid to tell the world who he was – or at least who he thought he was. Are we not, in some regard, doing the same thing with our choices of fly rods and gear?

In most situations, a fly rod, whether bamboo or graphite, is quite capable of executing effective casts and catching a lot of fish when in the right hands – it’s the chef, not the skillet. What it should boil down to is which rod brings you the most pleasure. I once heard legendary fly fisherman, Joe Humphreys, tell a story about a debate he had with another legend of the stream, Ed Shenk. Ed liked to fish with very short fly rods. Joe asked him why he fished with such short rods when they put him at such an obvious disadvantage. Ed told him it was because they are fun.

There was an awkward period as a teenager when I was preppy and an even more awkward phase when I wore parachute pants. Now, neither fit my style. As a fly fisherman, there have been periods of graphite obsession, and periods of bamboo obsession. Now, both fit my style. I am at peace with the realization that I don’t have to pick one side or the other because, doggone it, I like them both. Out of the far too many fly rods I own, five of them are bamboo, and for day in, day out fishing, I tend to prefer the versatility I get from good graphite rods and find them to be the most useful, practical choice. But I still fish very frequently with my bamboo rods because they’re not impractical, and well, they’re just plain fun… And there’s just something about that smell.