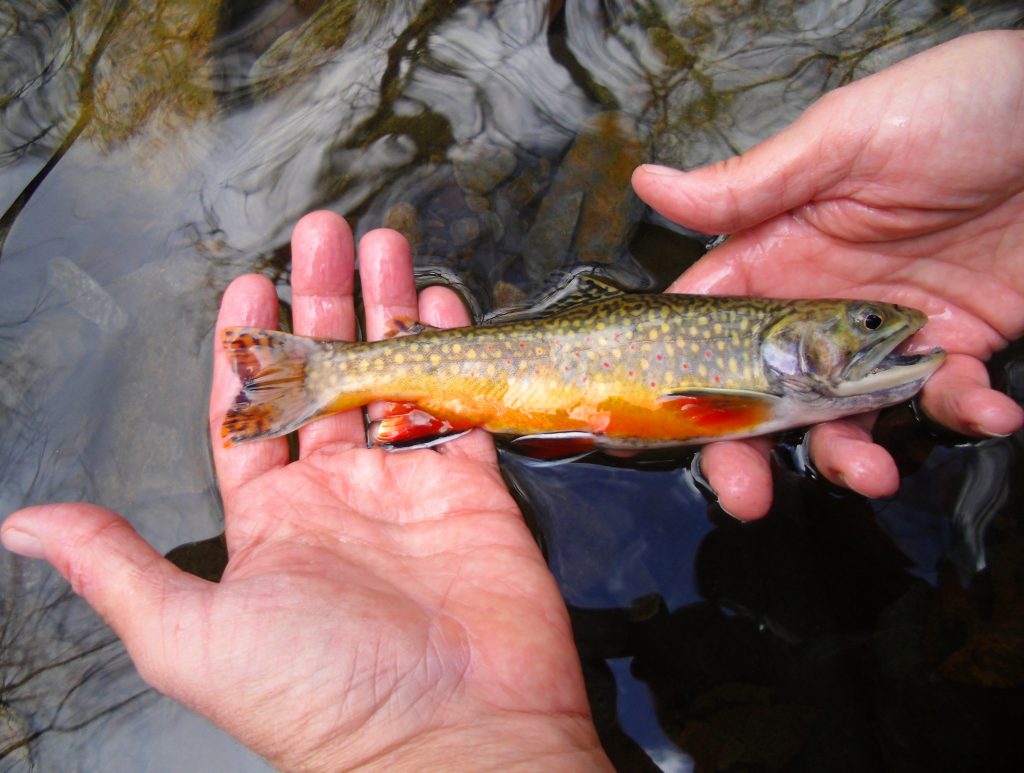 These are hardly the idealized fly fishing journeys that most anglers conjure in their minds in those last few moments before sleep takes hold. It’s not the casual, early morning stroll through a dewy meadow. It’s not the spacious pool in a lazily meandering river where 20-inch trout routinely clock in for their daily shift of methodically sipping delicate mayflies. In fact, unless you are one of a few passionate, dedicated, and perhaps slightly mentally unbalanced backcountry anglers, you might consider these journeys way too much like work.

This kind of trip involves laborious long miles up steep, narrow, rocky, root-infused trails. The necessities for the day are transported on your back. The destination sometimes has a name. Sometimes it’s only a mysterious, blue squiggly line on a map. And once you reach the destination, the journey has just begun.

Such small, rhododendron choked Appalachian streams may only yield a few trout per pool or pocket. To catch fish here, you need to cover water. You need to keep moving up the stream. But this isn’t the large watershed two thousand feet below where a well maintained trail shadows every bend. It’s another mile before the trail meets this stretch of stream again. From here, traveling the streambed is the only option. You fish as you go. But you’re diligent with your pace to ensure you reach the takeout point before dark. With vertical banks coated in impenetrable tangles of undergrowth, exiting the stream beforehand is not a possibility.

Navigating up the bed presents its own set of challenges. The stream forces its way down a staircase of ancient boulders, persistently carving away the earth’s multi-billion-year-old foundation. Through its course over, under, between, and around these timeless obstacles, countless small pockets, seams, and pools are formed. These are the places where water hesitates, taking a much needed rest from its perpetual quest to reach and become the sea. In every hesitation of water, native brook trout exist and thrive. They survive in the stream’s periodic moments of weakness.

With full intent to exploit these weaknesses, you enter the stream and prepare to fish the first run. It’s a little shoot that slices between two desk size boulders. Canopy is heavy above and to the right so you cast off your left shoulder. You place the fly perfectly on the upper left edge of the current. The fly casually drifts for mere seconds before vanishing in a sucking gulp! It’s not the showy splash to which you’ve become accustomed on this type of water. This is a good fish. The rod bends and pulses with every desperate evasive maneuver by the trout. Quickly tiring the fish, you raise your rod and grasp the line. A close up inspection confirms this is indeed a nice trout.

You reach out and gently cup the trout, admiring the vivid array of colors exploding from its body. An intense burnt orange consumes the trout’s belly. It continues over its fins only to stop abruptly against vibrant white tips. Its back and sides are a deep, rich, olive, randomly dotted with spots of yellow and orange. The orange spots are encircled by angelic blue halos. Temporarily mesmerized by nature’s perfection, you carefully remove the hook and place the trout back in the stream. You’re transfixed as he instantly seems to transform to rock, moss, and water. Measuring out at 10-inches, this Southern Appalachian brook trout may be small by many anglers’ standards. It’s a trophy in a small, backcountry Smoky Mountain stream, where a 6-inch fish is the standard.

At one time, you didn’t have to go to quite so much effort to catch the native brook trout of this region. Nearly all of the streams in the Appalachian Mountains were heavily populated with specks, as the locals call them. But years of irresponsible logging practices in the earlier part of the 20th century destroyed much of the brook trout’s habitat. Clear cutting right down to the stream created erosion issues and removed critical canopy. Streams were silted and warm.  Low elevation brook trout migrated or die. Most died. The ones in higher elevations survived.  Much of the high country couldn’t be reached by loggers. And the higher elevation was naturally cooler.

As time passed, logging companies began to focus their attention elsewhere. Meanwhile, more people had discovered the area, including sportsmen. But there weren’t many fish to catch. The lack of fish in these otherwise perfect streams prompted the introduction of non-native rainbows.  As more time passed, the forest began to return. Eventually, the streams had the solidified banks and necessary canopy to once again support a natural trout population.

Through decades of stocking, rainbow trout had taken hold and were reproducing. They had completely filled in the previous voids in the lower and mid elevation sections of stream. Consequently, they ceased all stocking of rainbows in the early 1970’s.  Great news, right?  Not if you happen to be a brook trout.

The acidic nature of Appalachian streams doesn’t allow for a tremendous amount of aquatic insect life, at least not enough to adequately support and grow the healthy population of trout that live there. With the rainbows now thriving in these lower elevations, there simply wasn’t enough food to go around. So brook trout, for the most part, remained relegated to the uppermost regions of the streams.

In an attempt to preserve the native brook trout in the Smokies, the park service closed most of these streams to fishing more than 30 years ago.  But after years of research, they determined angling pressure has little to no effect on these high-country brook trout populations. Consequently, most of these streams were re-opened in recent years. Since then, there has also been an effort to re-extend the range of the brook trout back into select mid elevation waters.

The first step in the process is defining a natural barrier, like a tall waterfall, that will prevent upstream migrations by non-native fish. Above the waterfall, existing fish are then removed by using a chemical called antimycin. This EPA approved chemical kills all fish and most aquatic insects from a stream. And it poses no threat to plants, amphibians, or humans. Only small areas of the stream are treated at a time. The chemical is then neutralized below the waterfalls with potassium permanganate to render it harmless. After treatment, crews augment the brook trout population with native species from other areas in the park with expectations of a full return of aquatic insects, a reestablishment of brook trout, and no more rainbows.

The entire process typically takes about 5-7 years and the stream, of course, is closed to fishing during the process.  Though controversial at first, this method has been highly effective and successful. It now serves as a model for similar projects in the Smokies and elsewhere. However, there is only so much water that meets these necessary requirements. Rainbows and browns will never be fully eradicated from the entire watershed. These trout have a solid foothold on the lower elevationsof rivers and likely always will. While there are now a few more brook trout streams that are easier to reach, unless a more effective method of eradication and replacement is devised, brook trout seeking anglers will continue to be relegated to long, steep hikes into remote places to find their prize.

Why do some fly fishermen go to so much effort to pursue a fish that averages about five inches in length? Throughout the region are relatively flat, fifty-yard-wide tailwaters. A fisherman can stroll five minutes from the car and find gobs of trout that are rarely smaller than ten inches! To a dying breed of relatively few high-country enthusiasts, size doesn’t matter. These anglers pursue trout in the Appalachian backcountry because the fish they catch are born there. They’re not created in the cramped, narrow concrete runs of a hatchery. And while many of the rainbows and browns inhabiting lower elevations in these watersheds are wild, only the brookies that swim in the high streams of these mountains are truly native.

Quite simply, native trout have a certain indefinable appeal to the self-aware angler. Perhaps it’s just that we as humans seem to be wired to yearn for a connection to something bigger. Whether through genealogy, science, religion, or fly fishing, there is an innate desire to link to the world that was here before us; if for no other reason than to better understand ourselves. For fly fishermen in the eastern United States, the opportunity to pursue, connect with, and maybe even understand the uncompromising brook trout that have existed and persisted for centuries before us provides that all too vital link.