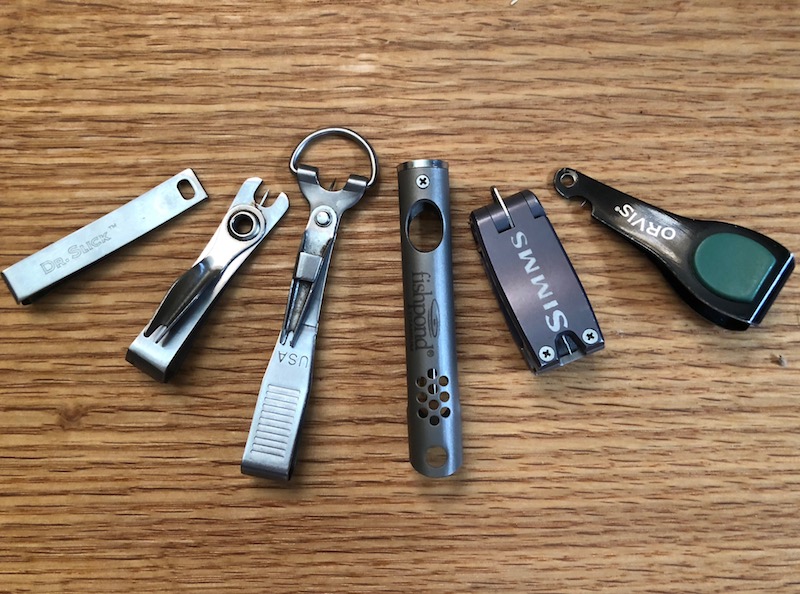 Welcome to the wonderful world of nippers! It’s probably pretty easy to figure out that the primary function of nippers (aka clippers, cutters, snips, etc.) is to cut your line. They are mostly used to trim the tag ends of monofilament after tying a knot or to cut a new piece of tippet from a spool. But as you’ll see, the right pair of nippers can perform a number of other tasks as well.

As I described before, my beginnings in this sport were humble at best and my funds were rather limited. There was a lot I could do with $10 back then and I certainly didn’t want to waste it on nippers – not when I could just use fingernail clippers. That strategy served me well for a time, until I figured out what a lot of fishermen eventually figure out. First, they make fingernail clippers out of very cheap, soft metal. After you repeatedly clip monofilament line, they form a series of nicks in the blade. It’s not long before they become completely useless. Second, when regularly exposed to water (such as every time you go fishing), they rust – quickly.

So you can constantly replace in expensive fingernail clippers or you can do what I ultimately did – drop $10 on a decent pair of nippers. They’re rustproof and will last years before the blades begin wearing out. The other benefit to a good pair of nippers is they are designed to cut line, not fingernails. What does that mean?

When working with smaller trout flies, particularly dry flies, it can be difficult to prevent the large, curved head of generic fingernail clippers from also clipping away some of the hackle. The straight, somewhat recessed blades on fly fishing nippers work and cut in tight spaces. Most nippers designed for fly fishing also include another simple but highly useful feature – a small needle.

When a fly tyer finishes a fly, he knots the thread at the hook eye and coats it with a thin, invisible cement. Well, in the world of fly tying, time is money and production fly tyers apply that cement quickly, often leaving an invisible layer in the hook eye. When you need to tie that fly on your line, you can’t get the tippet through the hook eye because it’s coated in glue. This happens even more frequently with painted, hard-bodied poppers, only the paint coats the hook eye. The little needle on your nippers will clear that layer of cement or paint and preserve your sanity when attempting to attach a fly.

As with most any fly fishing product these days, there are seemingly endless nipper styles and features to suit your needs and tastes. Some have a different shape, boasting a better ergonomic design. Others come with additional tools for tasks such as tying knots or sharpening hooks. Want to take it to the next level? Check out this description of Abel’s nippers: